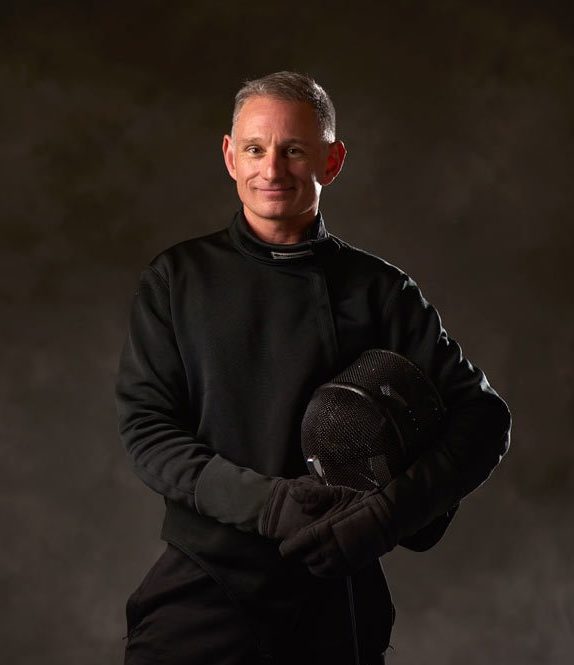 Physical Fitness
Newcomers are often surprised at the amount of sweat they produce after trying a fencing class for the first time. No doubt, fencing is a great workout, especially for your lower body. Fencers move around A LOT, albeit small movements back and forth. (PS: fencers don’t run: we have our own type of leg work, and it involves maintaining a sort-of crouched position, called the on-guard.)

Discipline-Oriented
The discipline required to fence lends a polish to the sport. The minimum skill level required to play is higher than many sports. One can simply throw a ball to some kids, teach them the basics of the pass and shoot and viola: soccer. But with fencing the student must first learn to hold the weapon: not gripping it like a hammer but rather like a strings musician holding a bow.

Fencing is a tool sport, and as such it requires a level of dexterity with the weapon that many other sports don’t require. The blade must become part of the fencers hand, mind, heart. It is as much an expression of one’s self as it is a sport. It is this mode of self-expression, some would argue, that allows fencing to transcend sport and become art.

Blending impulse with decision, fencing, none would argue, can move at lightening speed. Decision making changes at the speeds fencing operates in. It is no longer simply seeing and doing. the love of discipline, of rigor, of “training” itself: these are necessary components of the sport.

Mentally Rich
Part of the thrill of fencing is the (immediate) problem solving aspect of the sport. If you like puzzles you’ll love fencing. To be a good fencer one must have a balance of skills. It is not enough to be simply the fastest nor the strongest…

A good fencer adjusts his or her game, adapting, minimizing one’s opponent’s strengths and maximizing your own. FENCING IS A THINKER’S SPORT. It is in the choice of tactics, how and when they are implemented, and how to continuously adjust your game before your opponent can adjust his. Too much patience, and you become passive and are consumed. Too much aggression and you become your own worst enemy, throwing yourself on your opponents blade. Here is one reason a seasoned, silver-haired fox has brought many an anxious young buck to his knees: smarter and more conservative with his energy, picking the right moment to strike, working with his own impulses rather than having to fight against them.

Concentration in the Present Moment
The immense concentration required of our sport is a draw unto itself. The focus, the being in the moment, the now-ness of fencing is an immense draw to many.

The Thrill of Combat
There is an emotional component to fencing that is shared only with the other combat sports. And that is the combat element of the game. Victory is achieved not simply by outscoring one’s opponent, but by actually stabbing them with the point of your weapon. You assess their game, adjust your own game accordingly, and defeat your opponent on the field of combat. It is an individual sport where one player pits herself against another player in combat. This thrill of vanquishing your opponent in combat is one that fencers can reach for their entire lives. I don’t know many boxers or wrestlers competing in their 60’s, but I know plenty of fencers who do….

They Can’t Stay Away
Once you’ve been bitten by the fencing bug, forget ever leaving. I’ve known people who’ve begun fencing at a young age then stop when career and marriage and kids get in the way, only to return years later to the sport.
I’ve also seen people take up fencing long after their “prime” physical years have fled. It speaks to the richness of the game, that one can play at it, have a blast and get a great workout at whatever age.

So if you’re thinking about taking fencing, or re-turning to it after a hiatus, please: join us here at NWFC. Our club prides itself on it’s inclusive nature. We are a family here. Welcome!