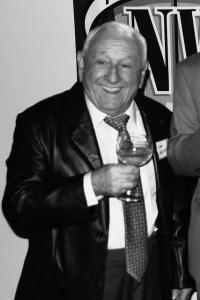 The Northwest Fencing Center lost its founding father this week. I am sad to report that Leon Auriol passed away, but he left behind an incredible legacy for Pacific Northwest fencing.

Leon came to America in 1963 and began his coaching career in the Seattle area after responding to an ad for a pentathlete fencing coach. In 1967 he received an invite from Colleen Olney (Bob and Michael Marx’s mom) to come to Portland. This began the era of Leon traveling throughout the Pacific Northwest to teach fencing. He had stops in Victoria BC, Seattle, and Portland. He taught in clubs, schools, and community colleges all around the area. In 1969, Rocky Beach established Salle Auriol in Portland Oregon. The original patch design for Salle Auriol on a green field (still used by Salle Auriol Seattle on a blue field) is Leon’s design. Leon was the team coach for our 1968 Olympic team in Mexico City. In 1971 he sponsored his brother Yves to come to America. In 1972 the brothers, Yves in Portland and Leon in Seattle, established their clubs and began long and successful careers as fencing masters. This was the beginning of two of the strongest fencing clubs in the region and the nation for decades to come.

I met Leon when I was an 11 year old kid. I had fenced with Colleen Olney for three years prior and just started fencing at Salle Auriol. Michael Marx decided it was time for his first squad of youth fencers to travel to the Leon Auriol cup in Seattle. So, we all piled into a van and went to Seattle. We stayed at Leon’s A framed house. We met Leon and his lovely wife Sandy.

Many fellow fencers will identify with what I am about to describe. The first thing that struck me was his smile. It was immediate and permanent! As if I had an instant longtime friend. The second thing that struck me was that this guy is very, very French! That was the night I was introduced to Leon Auriol the French chef! We had rabbit that night and then crepes in the morning. All while he smiled, laughed, sang, and told us stories of great fencers and their masters.

Our group visited a few more times, but in the late 1980s I got the chance to actually learn fencing from Leon Auriol. Leon had agreed to coach regularly at Salle Auriol in Portland. I remember going with my Mom to pick Leon up at the train station and taking him to the club in Beaverton. I always enjoyed this commute as I could learned more from Leon. Lessons with Leon were fantastic. He taught a classical style, but what I learned from him was more important than fencing. I learned that you could actually have a job you loved. It was clear to me that this man loved fencing because he exuded pure joy while teaching. Always with a smile and laughing while he did it.

My story isn’t alone. Leon taught fencing with passion and his love of the sport was infectious. This was repeated hundreds and perhaps thousands of times across the Pacific Northwest and beyond.

My last encounter with Leon was at the 2015 US summer nationals. He was there with this fencing club going from one strip to the next. Like his brother, he would watch his fencers with a critical eye as they progressed through the various events. I caught Leon talking with our head fencing Coach Christophe Duclos. I could hear that laugh and saw that smile as I walked up to them. I shook his hand, he looked me in the eye, and nudged Christophe and said ‘I know this one’. I knew again, that I had a longtime friend, mentor, teacher, coach, and maître in Leon. I know I am not alone in saying this, but I will miss Leon very much. The impact he had on Pacific Northwest Fencing lives was huge, positive, and always joy filled. Our condolences go out to his wife, family, friends, and fencers. His legacy will live on in the clubs he established and in the lives he touched.